We have received several requests for information and our comments on what on Earth is going on in Italy, so despite the fact that all seems settled as we speak, as this ever-changing situation will likely feature in the news over the summer we thought we should communicate our views to you, along with some pictures on the grounds that one picture is worth a thousand words. You will remember that this saying was made popular by Fred R. Barnard in the advertising journal ‘Printers’ Ink’ in the US around 1921. Fred was promoting the use of images in advertisements that appeared on the sides of streetcars.

We have received several requests for information and our comments on what on Earth is going on in Italy, so despite the fact that all seems settled as we speak, as this ever-changing situation will likely feature in the news over the summer we thought we should communicate our views to you, along with some pictures on the grounds that one picture is worth a thousand words. You will remember that this saying was made popular by Fred R. Barnard in the advertising journal ‘Printers’ Ink’ in the US around 1921. Fred was promoting the use of images in advertisements that appeared on the sides of streetcars.

Clients have been asking if political crisis has returned to Italy (has it ever gone away?) and also if the sovereign debt crisis has returned to Europe. Coincidentally we have just had a meeting with one of our favourite clients who happens to be of Italian heritage and he thinks that the large numbers of foreign migrants who have landed in southern Italy in a relatively short space of time rather than being distributed more evenly and fairly between neighbouring EU countries is to blame for much of the current attractiveness of the two main populist political parties. Please do bear in mind that this article is correct as at this morning (Monday) but things in Italy do have a habit of changing very rapidly, so the exact details of who is currently in power may have changed by tea time. However, the medium and long term economic fundamentals there will remain the same.

Just to update you if you haven’t been following the shenanigans, on Friday the Prime Minister designate Giuseppe Conte presented his list of chosen ministers to President Sergio Mattarella for the second time in a week and the President this time gave his agreement so the new government will be sworn in this Friday. Ministers are drawn from both the anti-establishment Five Star and the right-wing League parties. Importantly the new Finance Minister, their equivalent of our Chancellor of the Exchequer, is in favour of Italy’s continued membership of the euro. But the populists’ conflict with the EU is not over by any means, both Five Star and the League have promised new welfare spending and tax cuts, both of which run into conflict with the EU’s strict spending rules. They are also mutually exclusive of course as you can’t spend more and tax less at the same time without borrowing even more money. The new Interior Minister has promised a tough new policy on immigration which again may provoke arguments within Europe.

As a reminder, sovereign debt, also referred to as government debt, public debt and national debt, is essentially how much a country’s government owes to outside lenders. Sovereign debt is an accumulation of a government’s annual trading deficits, so it shows how much more a government spends than it receives in tax revenue over time. The major immediate questions until last Friday were, is Italy going to leave the euro and return to the lira or could it even leave the EU? Well, the probability of Italy leaving the euro seems to have now shrunk for the time being, but there is still plenty of uncertainty surrounding Italy’s relationship with the EU.

Eurobarometer is a company that surveys opinions on a wide range of issues from individuals and companies in the EU and its findings are often used by European government departments when planning for the future. Their current data on Italian public opinion is useful, particularly when this is compared with attitudes here in the UK. The following charts divide the results of these surveys by age group. They show answers to the following questions: “How attached do you feel to the EU?” and “Do you see yourself as your nationality and European?” 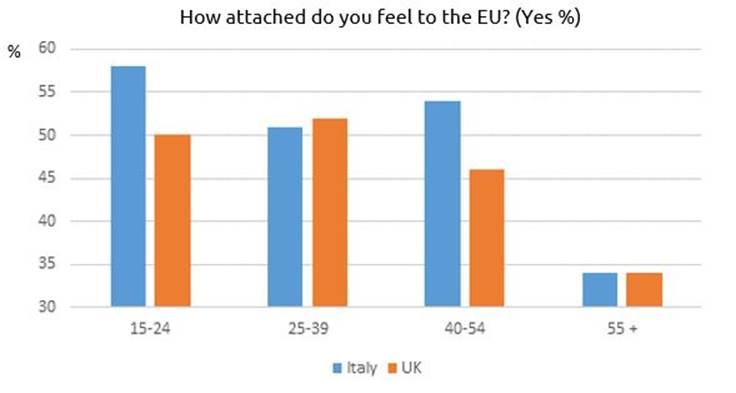 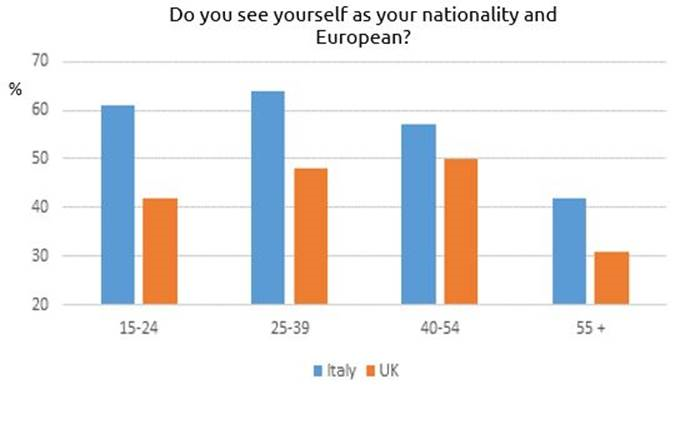 By European standards Italy is not very fond of the euro. In this respect, of all EU countries Italy is the most similar to the UK. But Italians are more attached to the euro than the UK and importantly they feel more European. The other key similarity is between the 55 plus age group in both countries. Those above the age of 55 are not keen on the euro. But in Italy the elderly must face down redenomination risk and, with their higher savings, they have the most to lose.

‘Redenomination’ is the process of devaluing the face value of banknotes or coins in circulation either because inflation has made the currency unit so small that only large denominations are useful, or when a government wants to write off some or all of its debts. In this case, the Italian government owes around 250 billion euros and there is a growing demand from both sides of the political divide that it will be impossible to grow the economy with this ball and chain wrapped around their national ankle.

In the UK, post the Brexit vote we have seen a significant devaluation – but few voters know about it, or considered it in advance. In Italy, even the most ardent anti-euro voters would think at least twice about voting to put their savings back into lira. The stakes are a lot higher in Italy than in the UK and importantly the population knows it. So in the event of a referendum, the odds of Italy leaving the euro are low, considerably lower than compared to the UK’s vote to leave the EU.

Investors need to define the scale of redenomination risk. How much weaker would the lira need to be vs the euro? The consensus is it would have to be a lot weaker, but is that actually the case? The Italian current account is in very significant surplus, close to the best reading Italy has had in many years. This means that, unlike the UK, Italy as a nation is trading profitably. While this may come as a surprise to anyone who has ever owned an Italian car, his does not suggest an overvalued currency. The graph below from Bloomberg (May 2018) shows the picture: 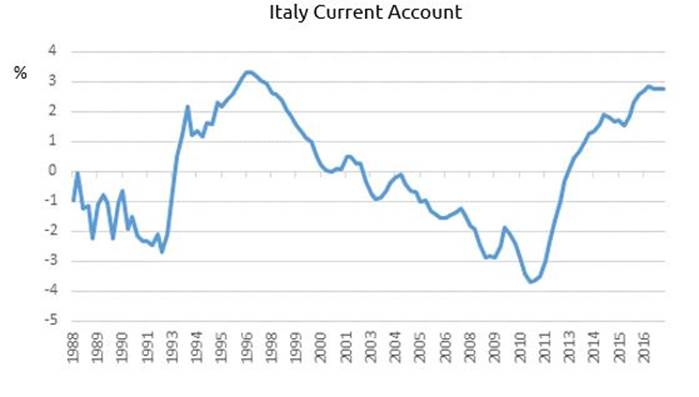 Secondly, according to Bloomberg, Italian unit labour costs have improved hugely in recent years versus the Eurozone and even versus Germany. Unit labour costs are often used as a measure of a country’s productivity and competitiveness. It is therefore also hard to see the need for a devaluation here. 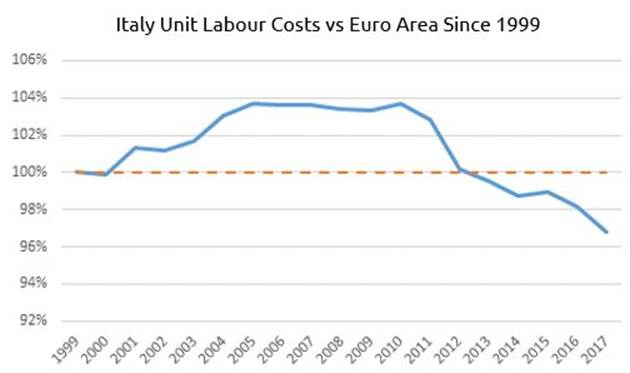 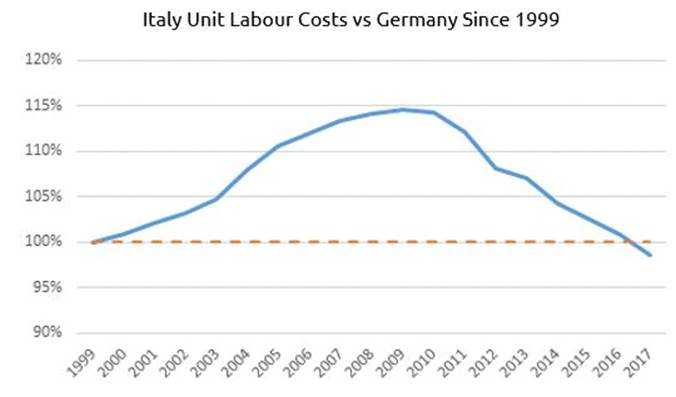 So why do so many people argue the lira should be so much lower? One argument is that the recovery has been sluggish and the Italian unemployment rate is high. 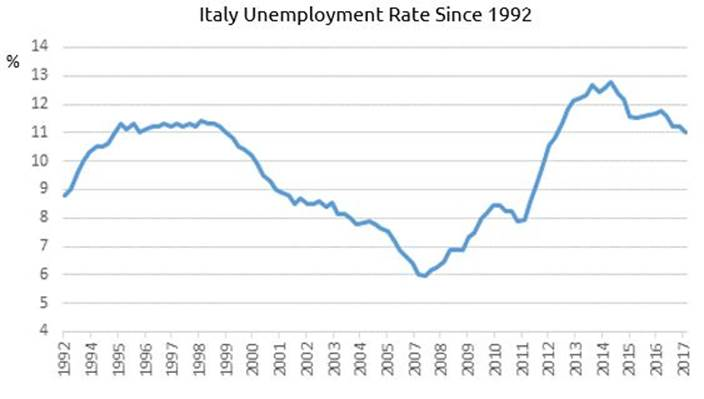 The unemployment rate has improved since 2015 but it is still high at 11%. Is this a sign of an overvalued currency? Not really. The high but improving unemployment rate is a function of how early Italy is in its recovery. Pressures on the banking system have made sure Italy was the last to emerge from the European crisis, but emerging it undoubtedly is. Unemployment should continue to trend down. Perhaps the more forceful argument for a weak lira is the assumption that the new populist government will manage the economy badly, resulting in a weaker currency than today’s economic fundamentals suggest. This is fair, but hard to quantify.

Even if Italy were to leave the euro in the future, the strong internal devaluation already experienced suggests the redenomination risk is not as high as many perceive. This in turn suggests investors should not bet too heavily on future Italian economic weakness irrespective of the political outcome in the general election likely to be held in September. The political news cycle will ebb and flow in the coming weeks, but a lot has already been discounted in the prices of Italian shares and bonds, also in European bank shares as well. Below we show the price of European banks versus the price of US banks since 2006. This chart from Bloomberg shows Europe’s bank valuations as a proportion of US banks’ valuation. 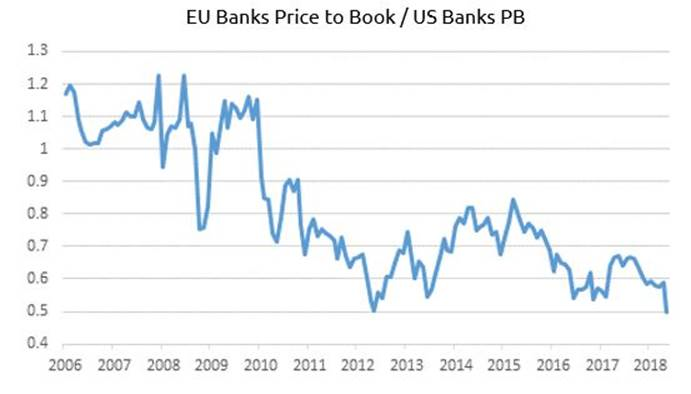 What is striking here is that European banks’ share prices are now the cheapest they have ever been versus US banks. European banks are now at 50% of the value of their US peers. The last time we saw anything similar to this was in July 2012, just before Mario Draghi, head of the European Central Bank, made his famous “I will do whatever it takes to preserve the euro” speech. As a quick reminder, the summer of 2012 was a time of genuinely acute economic and financial market stress. As an aside, bizarrely this now historic quote starts with Mr Draghi giving a strange analogy of how the euro as a currency is like a bumblebee – “It shouldn’t fly, but it does.” Well, he was 50% right anyway. In each of the four occasions that European banks have been this cheap against the US, they have rallied significantly and we expect this to occur again, with any volatility being used by our carefully chosen fund managers as a buying opportunity over the coming weeks. Truly, when others are fearful you should be greedy.

Next time we thought we would focus on the possible trade wars between the US and most of the rest of the world and what these might mean for our portfolios. Finally, last time we asked what advice would you give to a newborn baby such as Prince Louis. The responses we received included: smile a lot, don’t have any regrets, work harder than your parents, remember that 50% of whatever you achieve in life will be due to luck, always give something back and one rather sad comment advising the youngster not to get married too young. Oh well. This time, which musical instrument is the most requested luxury item on Desert Island Discs?

We are also very happy with the proactive, professional yet friendly manner in which your firm deals with our portfolio. We feel we are in safe hands! Thank you.

Our highly respected and well established team of advisers are experts in meeting clients needs, now and in the future.